"Enemy Of The People"

Terri Gross asked the most important question on Wednesday in her interview with Mark Mazzetti, the Washington investigations editor for The New York Times. The full interview is great, but it's the last question that really touched a nerve for me.


TG: ...My impression is because things have gotten so charged between President Trump and the press, because the president has made so many accusations that the press, including the failing New York Times, is - they're really purveyors of fake news, that the leakers are criminals, that this is all a terrible thing, I feel like I hear an extra note of caution in your voice in trying to be so fair and so trying to be exemplary and not offering anything that's opinion that goes beyond fact that you can document in a really neutral way. So I'm wondering - I guess my question is what impact is President Trump's accusations about the press having on you personally in your life as a reporter?

How flipping true is that?! I'm not anything more than a concerned citizen, yet I feel that pressure Gross observes when Mazzetti speaks. I am really careful to check sources and try to give people the benefit of the doubt. I rarely believe anything unless I can read it on some generally right-of-centre media outlet. I'm asking myself: "Is this just left wing hyperbole?" This is exactly what the administration wants. Does he say a word about Info Wars or Breitbart? He openly insists that we watch Fox and Friends! Their not the enemy of the people, just everyone else.

Horse shit. Thank you for making the observation, Terri.

I thought about linking to one of Info Wars recent videos, but it makes me sick to hear it. I don't wish him on you.

Here is Mazzetti's answer to the question.


MM: I mean, you can't deny that the atmosphere now is, as you said, very, very charged where it's combative so quickly to such a great level that it's hard to know, you know, where it leads with the president, you know, citing individual news organizations as purveyors of fake news. You know, investigative reporting involves, you know, exposing things that are either exposing wrong doing or just shedding light on things that for various reasons powerful people have tried to keep secret. That creates tension. And so I guess what I'm saying is that the - you can't ignore that we are in this unprecedented climate now where the White House and the president himself actively questions the role of the press and has declared them enemies. That is the truth. But what I'm saying is we have to figure out - we have to respond the right way. And in my mind, it's continuing to do stories even if it's things that he might not like or the administration might not like.

The issue of the "Sweden attack" should be taken seriously, as this article in The Guardian one year ago tries to do, with a warning about how mis-steps and cover ups will be used. What should not be taken seriously is a leader who is looking for any example he can find to justify his xenophobia.

Read this analysis on Slate, watch the film (on the previous link) and the Fox hyperbole, which is the apparent source of Trump's statements on Sunday. The President is way, way out of line if this is how he's going to rile up the crowd. Notice that the article featured at the sensationalised intro -- Sweden's rape rate under the spotlight --  to the film is about Julian Assange and rape culture, not about Muslims or immigration. Ah, details, right?! That article from 2012 (!!!) actually talks about a whole range of other issues that influence the rise in rapes, few of which are mentioned in the fear mongering short film.

I hope most people would agree that there is a big, big, big difference between what happened "last night in Sweden" and what I saw last night on Fox News about Sweden. It is extremely disturbing to feel, yet again, like Trump greatly welcomes bad news, just like in the recent Paris incident where nobody was hurt, in order to further stoke the fears of people about "a new radical islamist terrorist". Actually, it was a tourist from Egypt, and so far with no ties to other groups that I can see.

Will The Real Shepard Smith Please Stand Up!

So, I get this video from a friend on Trump's press conference. I listen...

I am surprised! I wonder if this is really on www.foxnews.com. Yeah, it is, with a very different headline: "Trump slams press reports of 'chaos' in the White House". Same talking heads, different message. We call it good editing.
Posted by Pavlusha34 at 1:09 AM 1 comment:

On the basis of totally distorted information from the newly elected leader and his administration, we are crushing the very concept of empathy. On the basis of no proof that the US will be safer, we are -- it feels to me -- driving a knife through the heart of tolerance for people who have waited years, followed rules, in some cases risked their lives, and who are guilty of no other crime other than being born in certain jurisdiction.

Please listen to this week's story on This American Life and just try to convince me that "It’s Working Out Very Nicely". To hear this series of stories and then say were putting "America First" is gaspingly cruel.


I don't believe that the stated purpose is the real purpose of this executive order. In the rationale pursuit of security objectives, you don't marginalise your expert security agencies and fail to vet your ideas through a normal interagency process. You don't target the wrong people in nutty ways when you are rationally pursuing real security objectives. When do you do these things? You do these things when you are elevating the symbolic politics of bashing Islam over any actual security interest. This will cause hardship and misery for tens or hundreds of thousands of people because that is precisely what it is intended to do.

It is a hard day when you find yourself wishing that this whole string of events stems only from gross incompetence.
Posted by Pavlusha34 at 3:25 AM No comments:

In my opinion, nothing matters more right now than getting rationale adults to speak with more discipline about these critical concepts. Failing to make a distinction is extremely dangerous, as I tried to explain before. But this problem seems to be getting worse.

Biased news: The New York Times has a bias. The Wall Street Journal has a bias. Examples are not needed as you can clearly see their bias on a daily basis on their Editorial pages. If you want to understand different sides, read both papers. But please do not conflate bias with "incorrect" or "fake".

Incorrect news: Journalists get it wrong, even in the NYT an WSJ. That's the point of a "Corrections" section in print media and why many online articles will have italic text at the bottom or an article that explain how and when an article was corrected. When you get it wrong, you correct the error and apologise. Example: Reporting that the bust of Martin Luther King Jr. had been removed from Oval Office. One might argue that this was a reporter with bias also making a mistake. Not good at all, but pretty common. If one writes a lot of incorrect news, they usually don't last very long at the NYT or WSJ.

Fake news: The intentional effort to write or say something one knows is false. Recent examples include the story that a pizza restaurant was a den of child abuse run by Hillary Clinton. Another example is the story that Barack Obama was not born in the US. Another more recent example is that 3-5 million people voted illegally in the election. Chilling aspects of Fake news relate to the current White House not understanding any of these terms and dubbing anything it dislikes as "fake".

Hate news:  When a news outlet or person on social media continues to perpetuate incorrect information that by all appearances seems to promote xenophobic ideas. Recent examples, Fox tweeting that the suspect in Quebec murders of innocent people praying led to the arrest of a Moroccan man when the actual article linked to the tweet stated that the only suspect was a French Canadian who harboured right wing bias. 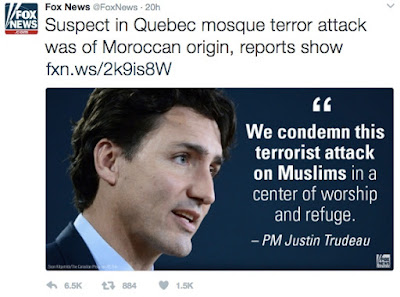 The article linked to that tweet, which itself rightly identifies the "lone suspect": 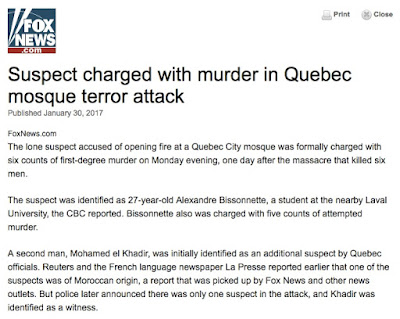 What happens on social media as a result of Hate News: 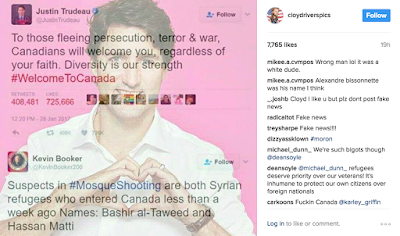 And yes, several days on, this post remains available to the 132,000 followers of Cloyd Rivers.