What can a consumer do except let other consumers know?!

Do not by an Indesit product!

Over the New Year holiday, our refrigerator stopped cooling (just over two years old), ruining all foods in the appliance. We arranged an engineer visit for 22 Jan 2016. The engineer came and the paid invoice states: "Work done: adjusted thermostat and tested ok.... Faul Code: R3". No parts or major repair was made, i.e., he turned it on and off.

The unit stopped again prior to 6 April (we were not at the property until then and are unsure when it stopped and all food ruined again). A second visit was arranged 19 April 2016. An engineer came and did not have a part he said he needed, meaning an additional visit was needed.

That visit was scheduled for 04 May 2016. Each time this happens, I have to arrange for the engineer to enter the property through friends and neighbours. The engineer has my wife's number (on the booking reminder‏). Instead of calling that number, we got a note through the front door informing us that he had been unable to access the property. Had the engineer called the number (or looked on that back door used to enter the house as he did on 19 April), he'd have seen our neighbours number or we'd have called her, as she was standing by next door to let him in.

A chat with Kieran from Indesit confirmed that the following: 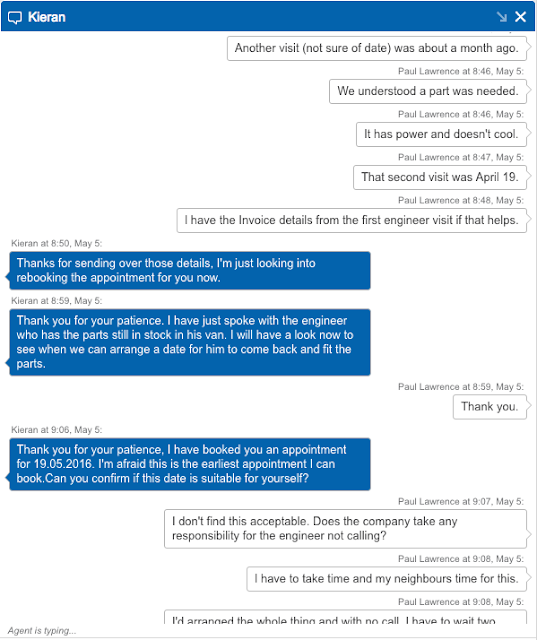 That's right, it was in the van. We just needed to arrange a new date. So simple, right?

That was supposed to be today. Despite a formal complaint, the best they could do was re-schedule another visit 19 May 2016. They did, ironically, kindly offer me "3 months of warranty free of charge and a Refrigerator Care Pack". In actuality, they sent a Washing Machine Care Pack. They also said:


Please rest assured that we do value your custom and will always aim to resolve any of your future issues as quickly and efficiently as possible.

This morning, my wife got up at 05:15 so as to catch a train and make the 09:28 – 12:28 visit slotted on the e-mail we got last night. Literally an hour before the visit, she got a call that there was no part in the engineers van, meaning that they’d have to order the part and the soonest they’d be able to return is 6 June.

I called Indesit this morning and told this story to someone who said they’d have a manager call me “in four hours”. Six hours later, I called back, told yet another operator this story – waited on hold for another 15 minutes. When he came back on, he flatly said that the only solution was to wait until 6 June since this required ordering a part.

I asked him if he considered this normal customer service, to which the poor guy said it was the best he could do.