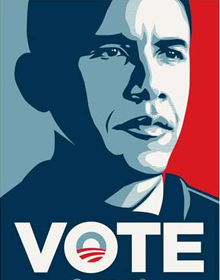 I can't listen anymore. It's seems like a numbing cacophony of stats from both sides that imply the other side is lying or telling half truths.

But I still woke up this morning and sent of my vote, which I trust might sway the results in the swing state of Vermont.

I didn't need convincing -- I have found the Romney/Fox News/Republican/Ayn Rand view of the world narrow, self-centered, short-term and historically unfounded. I got my problems with Obama and politicians and the way the world is moving, but I see the clear differences. 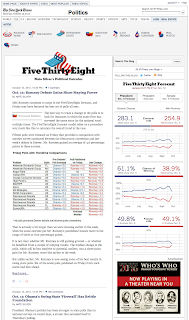 It makes my stomach twist up with nervousness that garbage like Obama's America: 2016 was advertising on the NYT Five Thirty Eight blog last week, just as the polls are to close. Some really helpful comparisons on a "Who's Who" on Obama's founding fathers!? This film panders to the very worst stereotypes and distortions. While there are many moral equivalency arguments to have about left and right wing "art", this is out of bounds for dishonesty and divisiveness. (Obama's thoughts on the film.) That the film is advertising on Five Thirty Eight and soliciting more tax-deductible donations!!! to spew shit before the election points right at the heart of what's wrong with money in politics. Thank goodness we have had Stephen Colbert mocking and educating us on the role of Super PACs.

Cutting through the loads of lies and counter lies and lies about lies, The New Yorker is comprehensive in its analysis to justify why Obama should get another four years. Read all the reasons, since they all matter, but don't miss the conclusion:

The reëlection of Barack Obama is a matter of great urgency. Not only are we in broad agreement with his policy directions; we also see in him what is absent in Mitt Romney—a first-rate political temperament and a deep sense of fairness and integrity. A two-term Obama Administration will leave an enduringly positive imprint on political life. It will bolster the ideal of good governance and a social vision that tempers individualism with a concern for community. Every Presidential election involves a contest over the idea of America. Obama’s America—one that progresses, however falteringly, toward social justice, tolerance, and equality—represents the future that this country deserves.

Or the New York Times or the Salt Lake Tribune... Yes, you knew how these publications would "vote", but the rationale and reasons -- dare we risk saying we value such talents in writing? -- hold together and make sense and are consistent with what we see happening in the world. And they show the contrast in this election, as well as why voting is a matter of great urgency.
Posted by Pavlusha34 at 2:26 AM No comments: